Thank you for your patience and understanding during this time.

Note: This event is now over.

Calling all mystery fans! Let's solve it together.

The Mystery Book Club meets the second Tuesday of every month in the Library's reading lounge. Copies of the book can be signed out at the library (we have extras!) and then meet with Corrie to chat about the book (and other favourite mysteries). 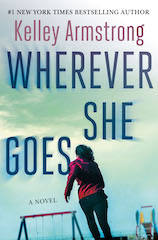 March's read is "Wherever she goes" by Kelley Armstrong.

“Few crimes are reported as quickly as a snatched kid.”

Instead, people question her sanity. Aubrey hears the whispers. She’s a former stay-at-home mom who doesn’t have primary custody of her daughter, so there must be something wrong with her, right? Others may not understand her decision, but after years of hiding her past, Aubrey realized she needed to get her act together before she could be the mother she thinks her daughter deserves.

When the police refuse to believe Aubrey, she comes to realize that rescuing the boy is up to her. But investigating threatens to expose her past, and Aubrey must decide how far she’s willing to go when saving another child could mean losing all custody of her own. (Kelley Armstrong)